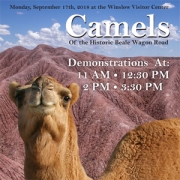 Thanks to the generosity of the Petrified Forest National Park, Doug Baum brought his Texas Camel Corps to the Winslow Visitors Center/Hubbell Trading Post on Monday, September 17, 2018. He provided special demonstrations at 11 am,  12:30 pm, 2 pm, and 3:30 pm for over 900 students and members of the general public, all of whom met the camels and learned about their history in the area along the Beale Wagon Road.

In 1857, Lt. Edward F. Beale established the Beale Wagon Road, a popular pioneer trail during the 1860s and 1870s that passed through the future townsite of Winslow. Beale famously used camels during his expeditions in the semiarid West. The animals ate desert grasses and were faster and stronger than horses, but the experiment did not result in their permanent use.

The Texas Camel Corps even made their way to the Standin’ on the Corner Park at the end of the day for a quick photo op.  Program partners also included the Winslow Chamber of Commerce, the City of Winslow, and the Old Trails Museum. We thank everyone involved for their help in making this such a great event!