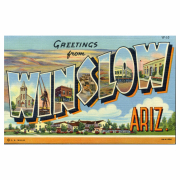 In February 2021, the Old Trails Museum debuted A Brief History of Winslow, Arizona, a short film that illustrates the city’s major historical themes through historic and contemporary images along with filmed segments.

Developed by OTM Director Ann-Mary Lutzick and Winslow Historical Society Board Member Lori Bentley Law in 2020, the film provides a basic overview of Winslow’s history and gives viewers a framework to absorb even more information whenever they visit one of Winslow’s many historic sites and buildings.

OTM thanks Northland Pioneer College for giving us the incentive to create the film by asking the museum to contribute to their series of online personal-interest classes. Lutzick has given many slide-show talks on Winslow’s history, but creating a film posed a new and daunting challenge.

Luckily, Law – co-owner of the Motor Palace Mercantile and recent addition to the WHS Board – came to the rescue! Before moving to Winslow in 2018, she was an Emmy-award winning photojournalist for NBC-Los Angeles for twenty-three years. Law brought her expertise to the project, and A Brief History of Winslow, Arizona is vastly improved for it.

Now that the film has served its purpose for NPC, OTM offers it as a virtual complement to our physical exhibits. You can view the film on our Videos page, the OTM You Tube Channel, and the La Posada Website.