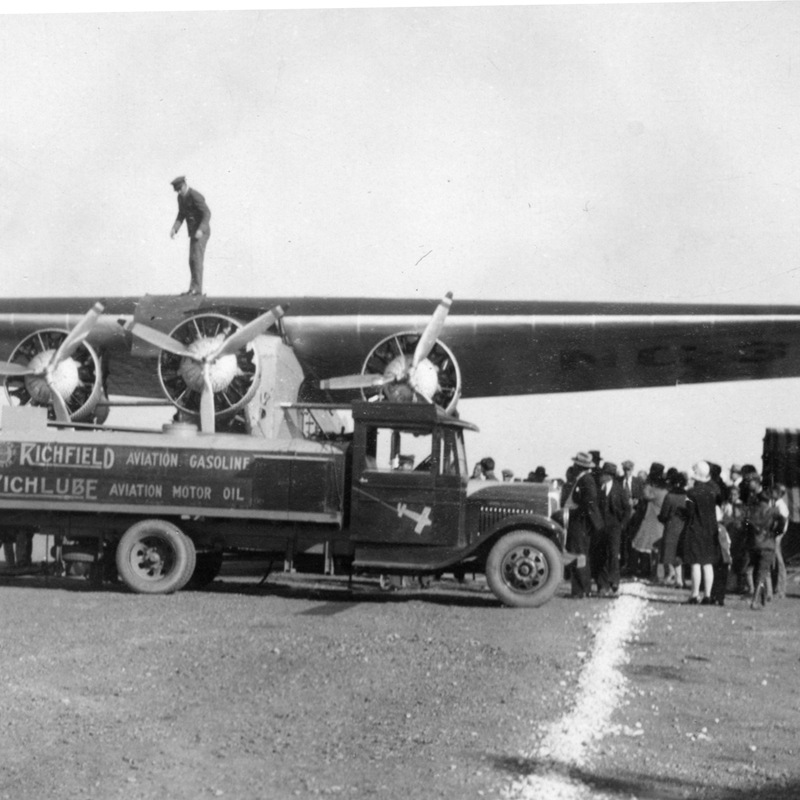 The Old Trails Museum continues its Journeys to Winslow Speaker Series at La Posada Hotel on Thursday, July 25, at 7 pm, with the free presentation of “Coast to Coast in 48 Hours! Winslow and America’s First Transcontinental Airline Service.” In addition, the Winslow Airport Commission, Winslow Rotary Club, and Wiseman Aviation will host the Journeys to Winslow Fly-In the following Saturday, July 27, from 9 am to 5 pm at the Winslow-Lindbergh Regional Airport. Both programs celebrate the city’s historic airport as part of Winslow’s tour stop for the Smithsonian’s Journey Stories exhibition.

Erik Berg’s “Coast to Coast in 48 Hours!” presentation explores Winslow’s pioneering role in passenger air travel using rarely-seen historic photographs and movie clips. In 1928, aviators Charles Lindbergh and Amelia Earhart joined businessmen Clement Keys and Paul Henderson in establishing Transcontinental Air Transport (TAT). As one of twelve key stops on TAT’s cross-country “Lindbergh Line” from New York to Los Angeles, Winslow boasted one of the West’s most advanced airports and a steady stream of famous and wealthy passengers. Winslow was involved in several significant events before TAT became Trans World Airlines in 1930, including the tragic crash of the City of San Francisco on Mount Taylor, the pioneering use of aircraft for archaeological research, and the little-known flying monkey publicity stunt.

Raised in Flagstaff and based in Phoenix, Berg is an award-winning historian and writer with a special interest in early 20th-century science and technology in the southwestern United States. His work on Lindbergh and aviation in the Southwest has appeared in Arizona Highways, the Journal of Arizona History, and the book, Arizona Goes to War: The Home Front and the Front Lines during World War II.

Both pilots and the general public are invited to the free Journeys to Winslow Fly-In on Saturday, July 27, at the Winslow-Lindbergh Regional Airport. The day begins with the Winslow Rotary Club’s Pancake Breakfast in the airport hangar from 9 to 11 am ($5/person), and additional food vendors will serve until 5 pm. The Just Cruis’n Car Club is hosting a “Show-and-Shine” all day in the airport parking lot, with a 1940 Seagraves Fire Truck and other classic vehicles on display. Shuttles will be available every half-hour from 9 am to 3 pm to take attendees to La Posada to view the Smithsonian’s Journey Stories and Old Trails Museum’s Journeys to Winslow exhibits.

There will also be historical displays in the airport hangar all day, including an exhibit by the Old Trails Museum on Winslow airport history and a display by the Cibola Historical Society from Grants, New Mexico, on the Mount Taylor air disaster. Erik Berg will be on hand to discuss his research on aviation in the Southwest, and Robert F. Kirk will discuss his new book, Flying the Lindbergh Line: Then and Now. Wiseman Aviation, the US Forest Service, and Guardian Air will also have material on display, informing the public about the Winslow-Lindbergh Regional Airport’s current activities.

Follow this “News” feed  and “like” the Old Trails Museum on Facebook for the latest details on all Journeys to Winslow exhibits and programs. Journey Stories has been made possible in Winslow by the Arizona Humanities Council. Journey Stories is part of Museum on Main Street, a collaboration between the Smithsonian Institution and State Humanities Councils nationwide. Support for Museum on Main Street has been provided by the United States Congress.

Final Events for Journey Stories in Winslow
Scroll to top