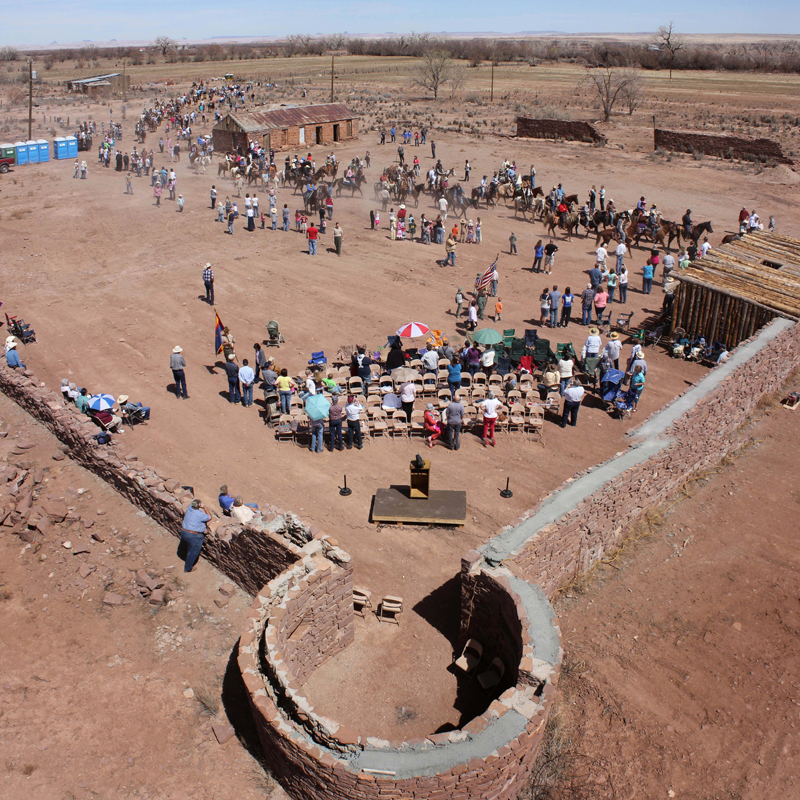 If you want something interesting to do this holiday weekend after the excitement of Thursday night’s fireworks, several community organizations are hosting special tours and exhibits as part of Winslow’s tour stop for the Smithsonian’s Journey Stories traveling exhibition.

Journey Stories, which explores the history of migration, transportation, and travel in the United States, is on display at La Posada Hotel along with the Old Trails Museum’s companion exhibit, Journeys to Winslow. Journey Stories Volunteer Hosts are available to guide visitors through both exhibits on Wednesdays, Fridays, Saturdays, and Sundays from 11 am to 4 pm, and on Thursdays from 11 am to 7 pm, through August 4.

The Winslow Chamber of Commerce’s exhibit, Southwest Native American Journeys, was developed in cooperation with the Hubbell Trading Post National Historic Site in Ganado, Arizona. This photo-rich exhibit explores the Navajo “Long Walk,” Native Americans and trading posts, and trader Juan Lorenzo Hubbell, among other topics. Vintage and modern Native American artwork will also be on display Mondays through Fridays from 9 am to 5 pm, and Saturdays from 9 am to 3 pm, at the Winslow Visitors Center.

Homolovi State Park is offering Guided Walking Tours every Saturday at 1:15 pm through August 4. Visitors should arrive at the park at 1 pm, or they can take a 1 pm shuttle from the Winslow Visitors Center. The one-hour tour explores Homolovi II, which is the largest and most excavated of the seven sites at the park. The Homol’ovi villages of the Ancestral Puebloans, ancestors of the Hopi, were at peak activity in the 1300s. Homolovi II had around 1,200 rooms, three large plazas, several clusters of pit-houses, and around 40 kivas (underground ceremonial chambers). Petroglyphs are also visible on a nearby trail.

Members of Winslow’s Mormon Church formed Brigham City Restoration, which is providing Guided Walking Tours of the partially-reconstructed fort every Saturday through August 4 from 10 am to 4 pm. Part of the first LDS Church Stake in Arizona, Brigham City was established in 1876 as a United Order community. The fort failed due to floods, drought, and labor shortages, and the settlers were released from their calling in 1881. Due to its historical, cultural, and architectural significance, the site was placed in the National Register of Historic Places in 1978.

Follow this “News” feed  and “like” the Old Trails Museum on Facebook for the latest details on all Journeys to Winslow exhibits and programs. Journey Stories has been made possible in Winslow by the Arizona Humanities Council. Journey Stories is part of Museum on Main Street, a collaboration between the Smithsonian Institution and State Humanities Councils nationwide. Support for Museum on Main Street has been provided by the United States Congress.