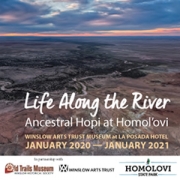 Homolovi State Park, the Winslow Arts Trust (WAT), and the Old Trails Museum – in cooperation with the Hopi Cultural Preservation Office – have created a unique partnership to host a major exhibition in northeastern Arizona: Life Along the River: Ancestral Hopi at Homol’ovi.

Join us for the exhibition’s Grand Opening on January 18, 2020, at 2 pm at the WAT Museum at La Posada Hotel, 333 East 2nd Street. The event will include the Hopi Polequaptewa Dancers and comments by Dr. E. Charles Adams. Life Along the River: Ancestral Hopi at Homol’ovi will be on display through January 10, 2021.

Created by the Arizona State Museum at the University of Arizona in Tucson, the exhibition synthesizes more than thirty years of archaeological research by the museum’s Homol’ovi Research Program. Through images, maps, and the voices of present-day Hopi, it tells the story of the people who lived in seven villages along the Little Colorado River – near what is now Winslow – in the 1300s. Present-day Hopi refer to the former settlements nestled among the small, raised buttes as Homol’ovi, “place of little hills.”

Dr. Adams, now retired, directed the Homol’ovi Research Program from 1985 to 2017. “We found the (archaeological) record remarkably intact and fully able to tell the stories of the place,” said Adams, who credits the program’s work with revealing a timeline for life at Homol’ovi, the relationships among the area’s inhabitants, and the importance of the river in their lifeways.

The exhibition also illustrates how collaborative research with descendant communities increases our understanding of the past and enhances the interpretation of archaeological resources. In recognition of its important archaeological resources, the Homol’ovi area became Arizona’s first archaeological state park in 1986 through a wide-ranging partnership between the Hopi people, state agencies, the governor’s office, local civic leaders, and avocational archaeologists.

After viewing Life Along the River: Ancestral Hopi at Homol’ovi, attendees are invited to visit Homolovi State Park and see how the pueblos and artifacts have been protected. Take the short 10-minute drive from the WAT Museum by going east on 2nd Street to 87 North; turn left and take 87 North to Winslow-Polacca Road; and turn left to arrive at the Homolovi State Park Visitors Center (see map below).

Life Along the River: Ancestral Hopi at Homol’ovi is made possible in Winslow by Arizona State Parks & Trails/Homolovi State Park, the Winslow Arts Trust, the Old Trails Museum, the Hopi Cultural Preservation Office, and the Arizona State Museum. For the latest updates on related programs throughout 2020, check the OTM Website or go to https://azstateparks.com/homolovi/events.