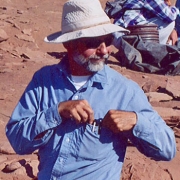 Thanks to the generosity of the exhibit’s creators at the Arizona State Museum in Tucson, Life Along the River: Ancestral Hopi at Homol’ovi will be on view at the Winslow Arts Trust Museum through January 2022. The exhibit was originally scheduled to close at the WAT Museum in January 2021.

In addition, the Winslow partners hosted a virtual presentation on Saturday, January 23, by Dr. E. Charles Adams (at left), director of the Arizona State Museum’s Homol’ovi Research Program from 1985 to 2017. Life Along the River — which synthesizes more than thirty years of archaeological research by the program — features images, maps, and present-day Hopi voices that tell the story of the people who lived in seven villages along the Little Colorado River, near what is now Winslow, in the 1300s. In New Knowledge from Old Sites: Hopi at Homol’ovi (click to see recording), Dr. Adams discussed how that research revealed a timeline for the area, the relationships among its inhabitants, and the importance of the river in their lifeways.

The exhibit’s Winslow run is hosted by a partnership between Homolovi State Park, the Winslow Arts Trust (WAT), and the Old Trails Museum, and in cooperation with the Hopi Cultural Preservation Office. You can see the Life Along the River exhibit at the WAT Museum by making a reservation with the La Posada Hotel Front Desk at 928-289-4366. You can also visit Homolovi State Park, located just a few miles east of La Posada, which is currently open with some restrictions.

2021 Historical Calendar on Winslow Over Time