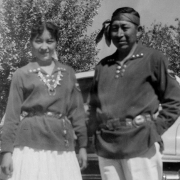 The Old Trails Museum is co-hosting a free event celebrating the new documentary series, Route 66: The Untold Story of Women on the Mother Road on Wednesday, August 17, from 5:30 to 7:30 pm. The program features film excerpts and a panel discussion at the Winslow Theater, preceded by a 5 pm group photo at the Standin’ on the Corner Park (all are welcome), and followed by a reception at the Flatbed Ford Café (RSVP to the reception by Friday, August 12, at 928-289-5861).

The three-part documentary series explores how women overcame segregation and gender discrimination to build fulfilling lives for themselves and generations to come on America’s most beloved road. The Winslow program focuses on the Arizona story, from the women who worked at the Navajo Ordnance Depot near Flagstaff during World War II, to Moore’s reflections of growing up in Seligman during the Great Depression, to the experiences of Chinese American and Laguna families in Winslow. These women shed light on some of the most important events of the last century and reflect upon the American experience.