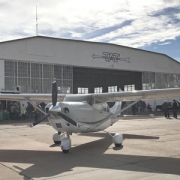 The 2018 High-Desert Fly-In and 2018 Fly Back in Time Gala took place at the Winslow-Lindbergh Regional Airport on Saturday, October 13. In a first-time partnership with Winslow Head Start, attendees were invited to become “Fly-In Angels” by donating winter outerwear and accessories for 4-to-6-year-old children.

Over 300 attendees attended the Fly-In that morning, when the Winslow Senior Center provided shuttle service from the parking lot, the Winslow Rotary Club hosted a pancake breakfast, the Just Cruis’n Car Club displayed some vintage automobiles, and Wiseman Aviation allowed attendees on the tarmac to view general aviation and historic aircraft.

Four pilots from Flagstaff’s EAA Chapter #856 provided complimentary plane rides to over 100 parents and their kids, who also enjoyed hands-on activities provided by the Winslow Public Library in the Flying Fun Kids Area.

The Flying Through History Area included OTM’s Flying through History: The Winslow-Lindbergh Regional Airport and The Swamp Ghost and World War II exhibits. Historian Erik Berg and Steve Owen from the Western New Mexico Aviation Heritage Museum in Grants shared displays and talked with attendees about the region’s aviation history.

That evening, 120 guests entered the hangar — beautifully decorated by Linda and Bruce Lazzarini – for the Gala. They were greeted by the Cherry Bombs, a nonprofit women’s group, with door-prize tickets and free retro treats from the Winslow Chamber of Commerce‘s Candy Terminal. Deborah Allen Photography took photos of attendees that she made available to them online for free later that week.

Attendees then enjoyed a catered buffet dinner by Creations in Cuisine and the nostalgic sounds of the Big Band Connection from Flagstaff. Some also dressed in period attire and competed in the Vintage Threads Costume Contest. The High Desert Silent Auction came to a close as winners collected their items donated by local businesses and individuals.

The High Desert Fly-In Committee thanks Pro 5 Design of Peoria, Arizona, for their Business Patron sponsorship. Don’t forget to check out our Facebook photo albums as well as our HDFI Website , which will soon link to a video of this year’s Fly Back in Time Gala by Venuti Films.

The Camels are Coming!