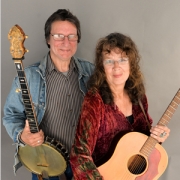 The Old Trails Museum offers its 2018 Winter History Highlight on Saturday, February 17, at 2 pm at the Winslow Visitors Center/Hubbell Trading Post, 523 West Second Street. As part of a statewide tour funded by Arizona Humanities, author Alison Moore and musician Phil Lancaster will present the free program, Riders on the Orphan Train – Arizona’s Hidden History. This 1-1/2 hour, multi-media presentation informs and entertains audiences of all ages with this little-known chapter in American and Arizona history.

Between 1854 and 1929, over 250,000 children were taken out of New York City and given away at train stations in every state in the continental United States. This “placing out” system was originally organized by Methodist minister Charles Loring Brace and the Children’s Aid Society of New York. His mission was to rid the streets and overcrowded orphanages of homeless children and provide them with opportunities to find new homes. Many of the children were orphans, while many others were “surrendered” by parents too impoverished to keep them.

The trains stopped in pre-selected towns where people interested in taking a child would assemble. The children were lined up on the platform or a meeting hall stage; encouraged to perform as a way to endear them to prospective takers; and inspected in order to determine whether or not they would be good workers. Children not chosen were put back on the train, and many were shuttled from family to family and town to town. This nearly eighty-year experiment in child migration is filled with both tragic stories and happy endings.

The New York Foundling Hospital, a Catholic organization, also sent children to be placed in Catholic homes. In 1904, they sent twenty-one Irish Catholic children to Clifton, Arizona. The subsequent confrontation over their stewardship became a state and national controversy, and the related case went to the Arizona Supreme Court. This incident in racial and class conflict is a poignant illustration of the cultural disparities between the East Coast and the developing West at the turn of the last century.

Until PBS’s American Experience aired an episode on the migration in 1993, these children’s stories were largely untold. After seeing the documentary, Moore and Lancaster developed their Orphan Train presentation, which is now the official outreach program for the National Orphan Train Complex Museum and Research Center in Concordia, Kansas. They combine live, original music; video featuring archival photographs and survivor interviews; and dramatic readings from Moore’s novel, Riders on the Orphan Train, to illustrate how this experiment in child relocation reveals a great deal about the successes and failures of the American Dream. The presentation concludes with an informal discussion on the historical and social significance of the Orphan Trains, and relatives and acquaintances of relocated orphans are invited to share their stories.

“We hope to help bring this subject to public awareness through the medium of artistic performance, to extend what has become a personal passion that will teach as well as touch people concerned not only with an experience that is uniquely American but ultimately, deeply human.” –Moore and Lancaster

“Everyone who attended was moved, educated and entertained…your program truly made an impact on our community.” – Cecilia Hurt Barham, Decatur (Texas) Public Library

Alison Moore, MFA, is currently a Humanities scholar in Austin, Texas. When she was a creative writing professor at the University of Arizona, she developed an outreach program for ArtsReach, a Native American literacy project in Southern Arizona. Moore’s Riders on the Orphan Train was funded in part by the National Endowment for the Arts, and her other titles have been recognized as an American Library Association Notable Book (1993) and with the Katherine Ann Porter Prize for Fiction (2004). Born in Arkansas, Phil Lancaster spent time in France studying and performing. After returning home, he received an Arkansas Arts Council fellowship and performed and recorded with the acoustic quartet, Still on the Hill. He resides in Austin but returns to France to tour with Trans-Atlantique.

The Old Trails Museum’s 2018 Winter History Highlight is funded in part by an Arizona Humanities grant for a six-stop tour of Riders on the Orphan Train – Moore and Lancaster will also present at libraries in Prescott, Wilcox, Douglas, Fountain Hills, and Prescott Valley prior to the Winslow stop. For the latest updates on all of the Old Trails Museum’s exhibits and programs, subscribe to our “News” feed or “like” the museum on Facebook.