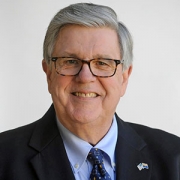 The Old Trails Museum offers its 2019 Summer History Highlight on Saturday, August 10, at 2 pm at the Winslow Arts Trust Museum, 333 East Second Street. Former publisher Win Holden will share the fascinating story of how a highway department newsletter evolved into one of the world’s most revered travel publications in the free presentation of On the Road Since 1925: The Colorful History of Arizona Highways Magazine.

First published in 1921 by the Arizona Highway Department (now the Arizona Department of Transportation) Arizona Highways first appeared in black-and-white magazine format in April 1925. Though it primarily provided engineers and contractors with information on road-construction projects, the publication also included travel stories and scenic photographs.

In 1937, new editor Raymond Carlson expanded the magazine’s audience to include the general public. He introduced color photography and featured the work of acclaimed landscape photographers who showcased the beauty and diversity of Arizona’s terrain, wildlife, and people. Subsequent editors – including Holden – maintained these traditions while also acting as industry innovators.

With over 125,000 subscribers in every state and over one hundred countries, Arizona Highways is now recognized as one of the world’s finest and most popular travel magazines. With a unique publishing model not dependent on advertising, the publication has unearthed new sources of revenue to sustain its operations. Learn how this remarkable publication beat the odds and thrives in a competitive environment that has seen other respected national magazines fall by the wayside.

Named the sixth publisher of Arizona Highways in 2000, Holden headed a diverse group of businesses that included book publishing, product development and marketing, and retailing. A Valley resident since 1980, he is on the board of the Greater Phoenix Convention and Visitor’s Bureau, and he was inducted into the Arizona Tourism Hall of Fame in 2007. He has also received Lifetime Achievement Awards from both the Arizona Office of Tourism and the Arizona Lodging and Tourism Association.

The 2019 Summer History Highlight is made possible in part by Arizona Humanities, a non-profit organization and the Arizona affiliate of the National Endowment for the Humanities. For the latest updates on all of the Old Trails Museum’s exhibits and programs, go to our website or “like” the museum on Facebook.