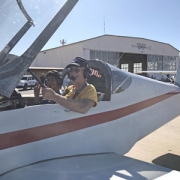 The 2019 High Desert Fly-In took place at the Winslow-Lindbergh Regional Airport on Saturday, September 21, from 8 am to noon. The free annual event was a terrific success this year, hosting over 250 attendees and over thirty planes. Our charity for 2019 – the Fly-In Angels for Winslow Animal Control – received two pallets of dog and cat food and treats from Purina in Flagstaff, along with many generous donations of cash and pet food from attendees. Wiseman Aviation also donated 40 cents from every gallon of fuel sold during the event, for a cash total of $500 that the High Desert Fly-In Committee presented to Winslow Animal Control.

Wiseman Aviation allowed attendees on the tarmac to view the many visiting aircraft and talk to the pilots, who were mostly visiting from the Deer Valley, Falcon Field, and Phoenix-Mesa Gateway Airports in the Valley. Pilots received fuel discounts and gift bags that included the 2020 historical calendar, Flying Through History: The Winslow-Lindbergh Regional Airport, created by the Old Trails Museum, sponsored by Wiseman Aviation, and available for purchase at the airport.

There were many activities for the whole family, and the Fly-In Committee thanks Flagstaff EAA Young Eagles for providing free flights to kids; the Winslow Rotary Club for providing their annual Pancake Breakfast, and the E & O Kitchen for offering delicious food from their tarmac patio. The Flying Fun Kids and Flying Through History Areas – provided by the Winslow Public Library and the Old Trails Museum respectively – were well-attended.

The latter included the Old Trails Museum’s exhibit Flying through History: The Winslow-Lindbergh Regional Airport and The Swamp Ghost and World War II exhibits; historian Erik Berg talking about his writings and display of artifacts on aviation in the Southwest; author Robert F. Kirk selling and talking about his book, Flying the Lindbergh Line: Then and Now, and Steve Owen from the Western NM Aviation Heritage Museum in Grants, New Mexico, talking about early aviation in the Southwest.

The High Desert Fly-In is a nonprofit partnership between Wiseman Aviation, the City of Winslow, the Old Trails Museum, the Winslow Airport Commission. the Winslow Chamber of Commerce, the Winslow Historic Preservation Commission, the Winslow Public Library, and the Winslow Rotary Club. The committee works throughout the year planning this exciting annual event and welcomes participation by individuals and organizations in and around Winslow.