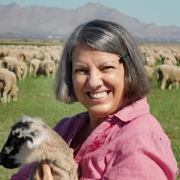 In conjunction with a Mid-Summer’s Day in Winslow on Saturday, August 11, the Old Trails Museum offers its 2018 Summer History Highlight at 2 pm at La Posada Hotel, 303 East Second Street. Using historical memoirs and photographs, Dr. Barbara Jaquay will explore Arizona’s sheep industry in her free presentation of Sheep Ranchers and Herders of Arizona.

Sheep ranching has been somewhat overlooked in the telling of Arizona’s history. In the 1500s, Spanish conquistadors began their push northward from Mexico and brought the region’s first sheep as a food source. Father Eusebio Kino introduced sheep into the Pimería Alta in the late 1600s, teaching local Native Americans sheep husbandry to provide a constant supply of wool and meat.

By the 1890s, sheepherding was a major enterprise in Arizona Territory. Many different ethnic groups settled the territory, where American, Mexican, Basque, and Canadian pioneers raised both their families and flocks of sheep. Northern Arizona families such as the Ajas, Candelarias, Jaques, and O’Hacos worked diligently through economic downturns caused by droughts, range wars, government regulations, and a shrinking workforce – sometimes weathering them better than cattle ranchers.

At its height, Arizona’s sheep industry boasted more than 150 sheep owners, and 1.5 million sheep roamed the grasslands. Despite the challenges, several Arizona families and tribal nations still work with sheep, and a few still graze them in the traditional method of moving the animals from the desert ranges to mountain pastures every year with the cyclical rhythm of the land. While it never competed with the five “C’s,” the sheep industry has added a great deal to the economic and ethnic diversity of Arizona.

Dr. Jaquay, a historical geographer, earned her Master’s from Arizona State University and her PhD from Texas A&M University. She recently published Where Have All the Sheep Gone?: Sheepherders and Ranchers in Arizona – A Disappearing Industry and has also written on Cuba, Costa Rica, and Arizona’s Native Americans. She has researched Father Kino’s journeys in the Pimería Alta while visiting his missions in Arizona and Mexico, and she continues to study anthropology and land use in her travels to over fifty countries and across all seven continents.

The 2018 Summer History Highlight is made possible in part by Arizona Humanities, a non-profit organization and the Arizona affiliate of the National Endowment for the Humanities. For the latest updates on all of the Old Trails Museum’s exhibits and programs, subscribe to our “News” feed or “like” the museum on Facebook.