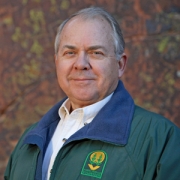 In conjunction with the 2018 High Desert Fly-In and Fly Back in Time Gala on October 13, the Old Trails Museum offers its 2018 Fall History Highlight on Thursday, October 11, at 5 pm at the Winslow Visitors Center/Hubbell Trading Post, 523 West Second Street. Kenneth Zoll, Executive Director of the Verde Valley Archaeology Center in Camp Verde, will give a free presentation of Arizona’s First Meteorite Man: H.H. Nininger.

Regarded as the “Father of American Meteoritics,” Harvey Harlow Nininger became a meteoriticist in 1923 after witnessing a meteor in the sky overhead. He moved his family to Denver, Colorado, in 1929 and established what was later named the American Meteorite Laboratory. He hoped that educating the public about the scientific importance of meteorites would facilitate the Laboratory’s mission of discovering, collecting, and studying them.

Nininger continued that mission when he founded the American Meteorite Museum in 1946. Housed in the former Meteor Crater Observatory, the museum’s location on Route 66 allowed him to display over 6,000 specimens to the public while conducting fieldwork at the nearby crater. When Route 66 was rerouted in 1953, he moved the museum to Sedona until it closed in 1960. He sold most of his collection to the British Museum in 1958 and the remainder to Arizona State University, which opened the Center for Meteorite Studies in 1961.

Nininger died in 1986 at the age of 99, just missing the return of Halley’s Comet. Over the course of his career he wrote numerous books and papers on meteorites and made significant contributions to the field, such as discovering new types of meteorites, developing new ways of recovering meteorites, applying meteorite data to missile design, and reaching new conclusions about the meteorite that created Meteor Crater.

In addition to his work at the Verde Valley Archaeology Center, Zoll is a cultural astronomy instructor with the Arizona Archaeological Society and is currently working with the ASU Center for Meteorite Studies on the use of meteorites in ancient Native American culture. He has authored several books and articles on cultural astronomy and rock art in Central Arizona, including Sinagua Sunwatcher and Heart of the Sky: Ancient Skywatchers of Central Arizona. Zoll is also a researcher of the Billingsley Hopi Dancers and a volunteer docent at Coconino National Forest cultural heritage sites.

The 2018 Fall History Highlight is made possible in part by Arizona Humanities, a non-profit organization and the Arizona affiliate of the National Endowment for the Humanities. For the latest updates on all of the Old Trails Museum’s exhibits and programs, subscribe to our “News” feed or “like” the museum on Facebook.

The Camels are Coming!
Scroll to top