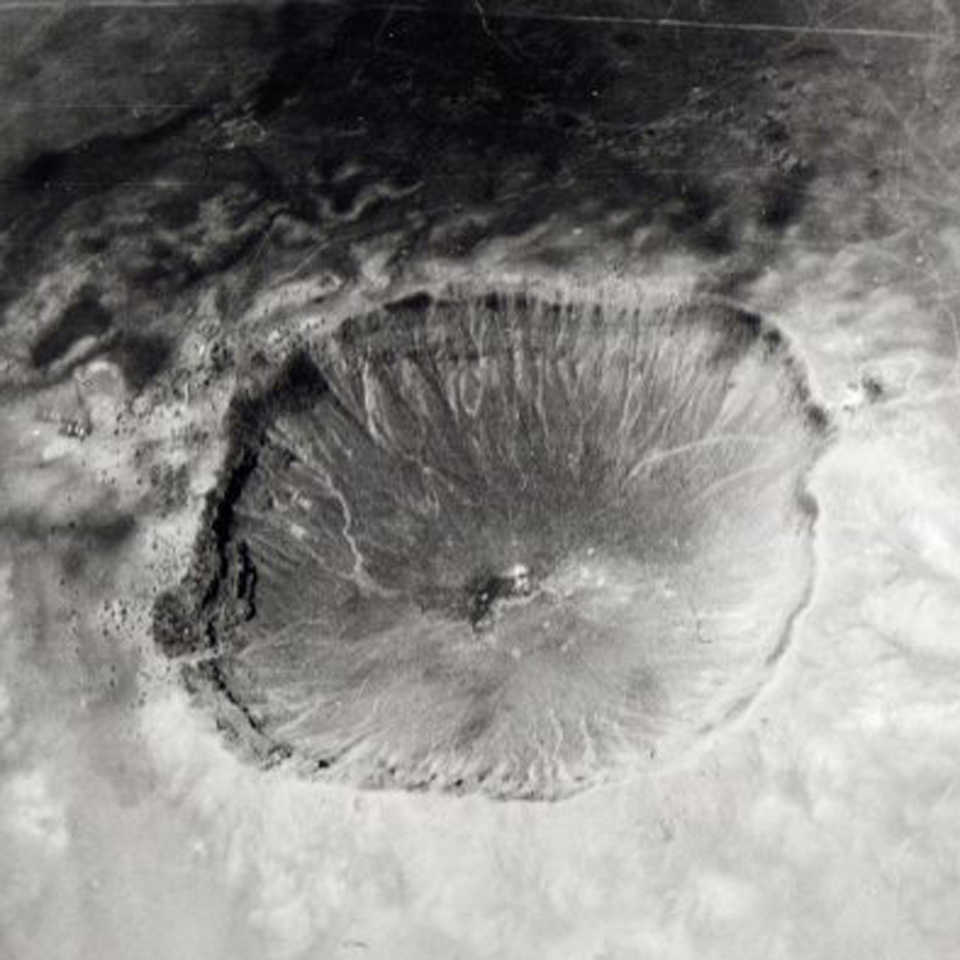 In conjunction with the 2016 High Desert Fly-In and Gala on July 29 and 30, the Old Trails Museum offered its 2016 Summer History Highlight on Friday, July 29, at 5 pm at the Winslow Visitors Center/Hubbell Trading Post, 523 West Second Street. Historian Erik Berg gave a free presentation of The Eagle and the Archaeologists: The Lindbergh’s 1929 Aerial Survey of Southwest Prehistoric Sites. (Left: Lindbergh’s image of Meteor Crater. Photo courtesy of Yale University Library.)

Based on extensive original research and featuring many rarely-seen images, Berg’s presentation described one of the Southwest’s greatest – and least-known – aerial adventures. Aviator Charles A. Lindbergh, the “Lone Eagle,” was already famous for his 1927 solo flight across the Atlantic Ocean in the Spirit of St. Louis. But Lindbergh and his new wife, Anne Morrow Lindbergh, also played an important role in Southwestern archaeology.

While working in the Southwest for Transcontinental Air Transport, Lindbergh became interested in archaeology and recognized that aviation could be a powerful tool for researchers. In cooperation with noted archaeologist Alfred Kidder, the Lindberghs agreed to conduct the first extensive aerial survey of prehistoric sites in the Southwest.

During the summer of 1929, the Lindberghs explored the Four Corners area in their Curtiss Falcon biplane, locating, charting, and photographing remote geographical and archaeological sites. From their unique perspective, they captured nearly two hundred iconic aerial images of famous landmarks including the Grand Canyon, Meteor Crater, Canyon de Chelly, Chaco Canyon, and Pecos.

To protect the sites, neither the Lindberghs nor the participating archaeologists publicized the project, and over time their aerial survey was largely forgotten. Today these historic photographs are among the earliest and best images of many important Southwestern sites and serve as unique yardstick for measuring changes across the region over the last eighty years.

Berg also discussed the exhibit on view through May 2017 at the Museum of Indian Arts and Culture in Santa Fe, Oblique Views: Archaeology, Photography, and Time. The exhibit features modern reshoots of several of Lindbergh’s images, providing now-versus-then comparisons of the sites as seen from the air. Berg’s work on the Lindbergh survey is also featured in the book from which the exhibit is drawn, Oblique Views: Aerial Photography and Southwest Archaeology.

Erik Berg is an award-winning writer and historian with a special interest in science and technology in the early twentieth-century Southwest century Southwest. His work has been featured in Arizona Highways, Journal of Arizona History, Sedona Magazine, and the book Arizona Goes to War: The Home Front and the Front Lines during World War II. Raised in Flagstaff and based on Phoenix, Berg is a past president of the Grand Canyon Historical Society.

The 2016 Summer History Highlight, a partnership program between the Old Trails Museum and the Winslow Chamber of Commerce, was made possible in part by a grant from Arizona Humanities. For the latest updates on all of the Old Trails Museum’s exhibits and programs, subscribe to our “News” feed or “like” the museum on Facebook.