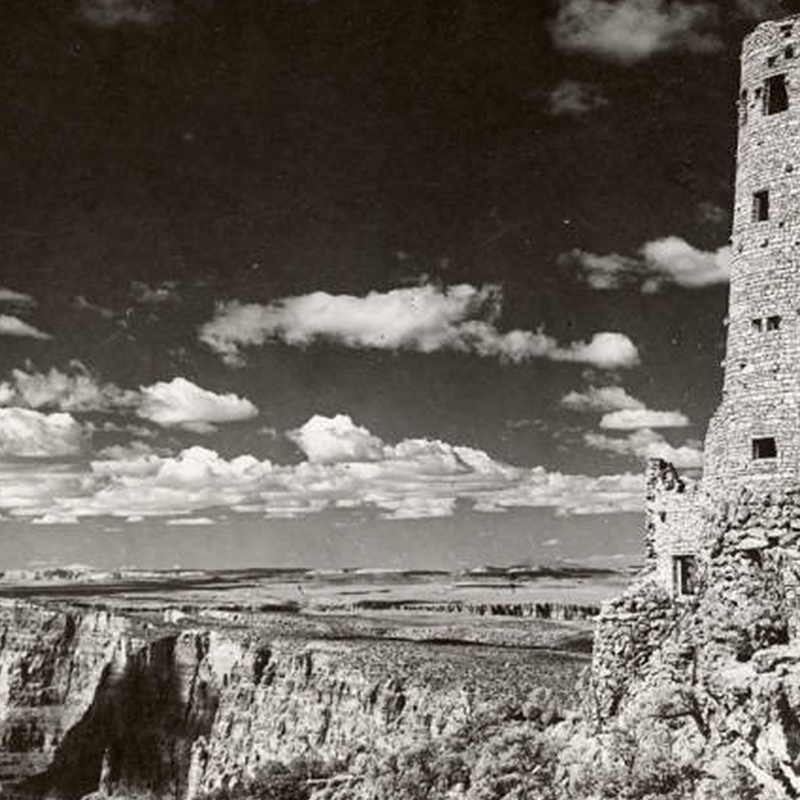 The Old Trails Museum offered its Fall History Highlight to 25 attendees on Saturday, October 31 at La Posada Hotel with the free presentation of Fred Harvey: Branding the Southwest. (Image of the Desert View Watchtower courtesy of NAU Cline Library.)

Archivist Sean Evans from Northern Arizona University’s Cline Library presented this visual walk through the history of the Fred Harvey company in the Southwest from the 1890s through its ownership by the Amfac corporation from 1968 to 1988. Evans’ presentation also served as a preview of the Cline’s exhibit of the same name, on display now through August 1, 2016.

The Winslow Harvey Girls also had their popular Harvey House Trunk Show on display before the presentation. This dedicated group of volunteers is committed to preserving the history of Fred Harvey, the Harvey Girls, and La Posada Hotel. Their trunk show features original china used in the dining cars and Harvey Houses along the Santa Fe line.

Evans has been an archivist at Special Collections and Archives at NAU’s Cline Library since 1981. He holds a Masters in History from NAU and a Masters in Information Research and Library Science from the University of Arizona. In addition to the Fred Harvey exhibit, Evans has curated two others for the Cline Library: Route 66 in Arizona: Don’t Forget Winona in 2009 and The Flagstaff All-Indian Powwow in 2012.

Starting in 1876, Englishman and entrepreneur Fred Harvey opened a series of “Harvey Houses” in cooperation with the Santa Fe Railway that were considered America’s first restaurant chain. After Fred’s death in 1901, son Ford Harvey developed the company’s focus on destination tourism to the Southwest. Both the Branding the Southwest presentation and exhibit will explore the company’s evolution, from small clapboard cafes to elegant rail-side hotels, through the lens of the Cline Library’s Fred Harvey Company Collection.

The Cline’s collection illustrates the company’s influence on the development of dining and tourism in the Southwest through material on the Harvey Girls, the Fred Harvey Indian Department, and Grand Canyon operations. Documents include menus, brochures, guest registers, press releases, architectural drawings, art work, and over 5,000 photographs of Fred Harvey concerns at the Grand Canyon and elsewhere.

The 2015 Fall History Highlight was scheduled to coincide with the Branding the Southwest exhibit run as well as with a special panel discussion and open house at the Cline on November 4. Through a special partnership, the Old Trails Museum has loaned several items from our Fred Harvey Collections to the Cline exhibit, including china, glassware, and textiles.  Some of those loaned items have just recently come full circle.

In 1985, Allen and Carol Naille donated their Fred Harvey collection to NAU’s Cline Library. Allen Naille was president of the Fred Harvey Corporation at the Grand Canyon during the transition from the Harvey family to Amfac Inc. In 1996, the Cline donated the three-dimensional objects from the Naille Collection to the Museum of Northern Arizona, which generously donated a portion of that collection to the Old Trails Museum this past August.