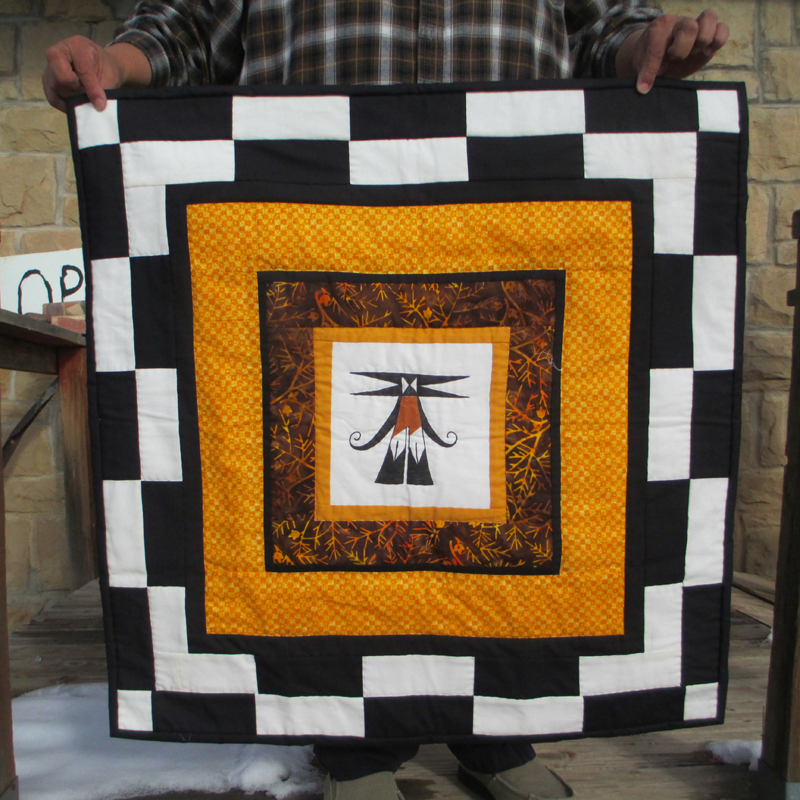 The Old Trails Museum continued its “History Highlight” program series with the free presentation of Hopi Quilting: Stitched Traditions from an Ancient Community, on Friday, February 21, at 7 pm in the La Posada Hotel Ballroom in downtown Winslow. Scholar Carolyn O’Bagy Davis blended historical details with vintage and contemporary images of  Hopi scenes and quilters, and she also displayed an extensive trunk show of Hopi quilts and textiles.

Hopi Quilting explored the long tradition of quiltmaking on the Hopi Mesas in northeastern Arizona. For centuries, Hopi men have grown cotton and spun and woven the fibers into blankets and clothing. With the coming of Anglo missionaries and government officials in the late 1880s, quilting was introduced to the Hopi people and quickly became integrated into the fabric of daily and ceremonial life in every Hopi village.

Today, quilts are given as gifts at dawn baby-naming ceremonies, graduations, and when family members leave for military service, and quilts even serve as burial shrouds at the end of life. Many Hopi women and some men are 4th and 5th generation quiltmakers who blend the artistic traditions of two different cultures. It is not uncommon to see a traditional Anglo pattern combined with an ancient Hopi image such as a kachina or clan motif, resulting in a quilting tradition that is a unique legacy of an enduring culture.

Carolyn O’Bagy Davis, a fourth-generation descendant of Utah pioneers, is the author of twelve books on quilting, archaeology, and the history of the Southwest. Her latest book, Desert Trader: The Life and Quilts of Goldie Tracy Richmond, was named as one of the Pima County Public Library’s Southwest Books of the Year in 2012, and her book Hopi Summer was selected as the OneBookAZ for 2011. Davis has curated several museum exhibits including the Arizona Historical Society’s Centennial exhibit, 100 Years—100 Quilts. She was the founding president of the Tucson Quilters Guild, was inducted into the Arizona Quilter’s Hall of Fame in 2010, and is a member of the International Society of Women Geographers.